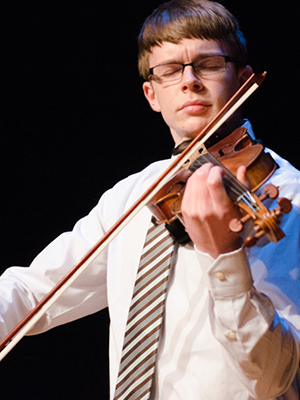 Samuele Parrini (violin), 18, lives in Greenville, South Carolina, where he is a senior at Wade Hampton High School and the Greenville Fine Arts Center. He is a recipient of From the Top’s Jack Kent Cooke Young Artist Award. Sam began violin at the age of four with Joanna Mulfinger Lebo and later with Jennifer John. He participates in the Fine Arts Center’s chamber music program under the tutelage of John Ravnan. In the fall, he will attend the Schulich School of Music at McGill University under Professor Axel Strauss. Sam has participated in the Young Artist Orchestra of the Greenville County Youth Orchestra since 2012 and has performed with them twice as a soloist. He has won an assortment of scholarships from the National Federation of Music Clubs, most recently including the Lucile P. Ward Scholarship. He is a winner of the Clemson University Concerto Competition, the Carolina Youth Symphony Concerto Competition, and is a two-time second place winner of the Hilton Head Symphony Youth Concerto Competition. He also received honors in the MTNA Senior Strings Division, the Kennesaw State University Young Artists Competition and was named a merit award winner by the National YoungArts Foundation. This summer, he will tour Asia with the National Youth Orchestra of the United States. His hobbies include playing jazz guitar and soccer, as well as collaborating with his friends at the Fine Arts Center.