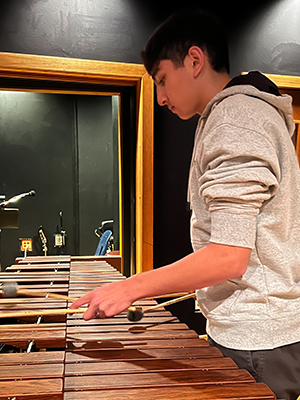 Rishab Jain (percussion), 16, is from Clarksville, Maryland. As a child, he was surrounded by music – both his mom and sister were musicians, and his home was perpetually filled with singing or violin playing. Knowing he wanted to be a part of the music surrounding him, he asked for percussion lessons as his present for his eighth birthday and never looked back. Since then, Rishab has been a part of the Howard County GT band (in elementary, middle and high school), the River Hill High School wind ensemble, marching band, drumline, pep-band, and jazz band, and a rock band known as the Clarksville Coughdrops. He has participated in the Solo & Ensemble festival over four times, is a two-time All State Band percussionist, has recently won the Inaugural Dove Marimba Competition, and is a part of the NDCP (National Diversity in Concert Percussion) program. Rishab will be performing as a soloist with the Mid-Atlantic Symphony Orchestra in March of 2023. Outside of music, Rishab enjoys playing basketball and working out.