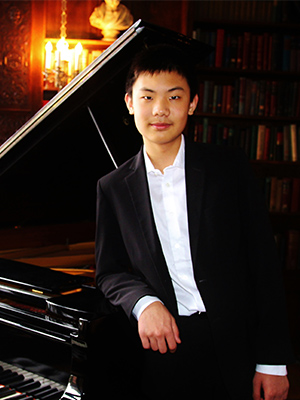 Raymond Feng (piano), 14, is from Pittsford, New York, and has been a pupil of Elier Suárez since age 5. He recently won First Prizes in the Thousand Islands Chopin International, the Oberlin Conservatory Cooper Piano Festival, Duquesne National Young Artist, and Ithaca College Piano Competitions. He has appeared with orchestras from Rochester, New York, to Perugia, Italy. In 2014, Raymond was the only classical musician to receive Genesee Valley Parent Magazine’s 20 under 20 honor. Raymond’s other interests include computer programming and music improvisation. His favorite sports are tennis and competitive swimming.