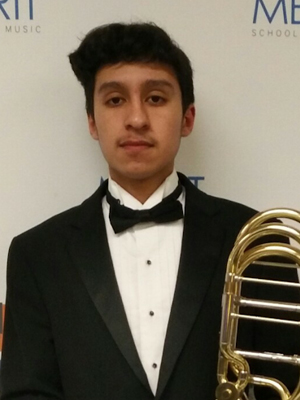 Rafael Noriega Jr, 15, lives in Chicago, Illinois, where he is a freshman at Gwendolyn Brooks College Preparatory Academy. He is a recipient of From the Top’s Jack Kent Cooke Young Artist Award. Rafael studies trombone at the Merit School of Music under Timothy Riordan, where he performs in the Merit Wind Symphony, Brass Ensemble, Trombone Choir, and the Bone Rangers. His favorite musical experience was performing the national anthem for an honor awards assembly at his school. Rafael also enjoys playing sports, video games, and spending time with friends.