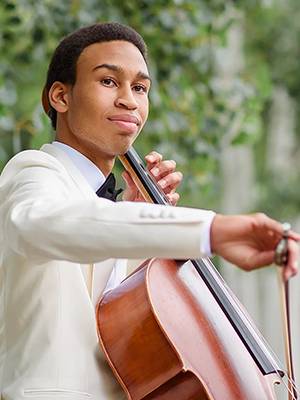 Quenton Blache (cello), 20, hails from Wake Forest, North Carolina, and currently resides in Los Angeles where he is a junior at the University of Southern California Thornton School of Music. He studies cello with Andrew Shulman. Quenton has won numerous competitions, including the Omega Psi Phi Fraternity, Inc. Talent Hunt Competition and the USC Bach Competition Undergraduate Division. He has performed in Europe, Asia, and at Carnegie Hall as a member of the National Youth Orchestra USA. An accomplished composer as well as a cellist, Quenton is especially passionate about composing for visual media. He has scored for the Vanuatu documentary No Part Too Small, and he is also the composer for the “Resilience Project,” a climate change “art-ivist” performance series that is a part of the inaugural USC Arts and Climate Collective. In his spare time, Quenton enjoys playing chess and aspires to one day be an International Master.