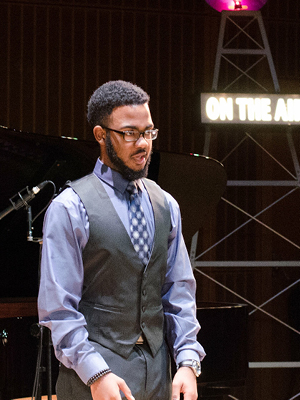 Preston Jones (baritone), 17, from Fort Washington, Maryland, is a recipient of From the Top’s Jack Kent Cooke Young Artist Award. He is a senior at Suitland High School and currently studies voice with Kenneth Boucher. He began his study of classical music in the ninth grade and was immediately fascinated—whether studying music theory, developing his vocal technique, or honing his skills as a performer. In the past three years, Preston has performed as a chorus member with Maryland Lyric Opera, Prince George’s Philharmonic, and “An Evening with John Williams” with the Baltimore Symphony Orchestra. He plans to major in vocal studies in college and, after that, to pursue his dream of becoming a professional opera singer.