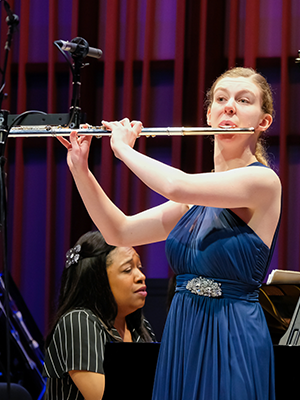 Phoebe Rawn (flute), 18, is a senior at Garfield High School in Seattle, Washington, and currently studies with Zart Dombourian-Eby. She is a recipient of From the Top’s Jack Kent Cooke Young Artist Award.

For the past two years, Phoebe has volunteered as a flute tutor through the Seattle Music Partners program and will serve this spring as a regional director for the “Back to BACH” Project, both programs with a mission of bringing classical music to elementary school children. In 2018, Phoebe joined the National Youth Orchestra (NYO) on its tour of Asia under the baton of Michael Tilson Thomas, and she is thrilled to join NYO again in 2019 for its European tour under Sir Antonio Pappano.