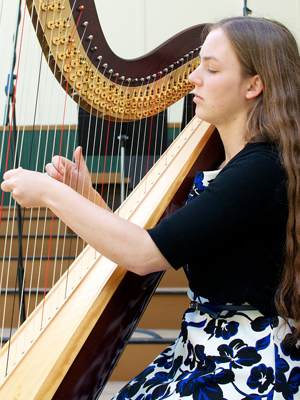 Phoebe Durand McDonnell (harp), 17, is from Bar Harbor, Maine, where she is a homeschool student. She is a student at New England Conservatory’s Preparatory Division in Boston, where she studies with Franziska Huhn. She has attended Maine All State Music Festival in 2011 through 2013, and the Boston University Tanglewood Institute in 2013. She has performed with various ensembles, including with the Portland Youth Symphony Orchestra and with the University of Southern Maine Orchestra. She also plays Celtic music and has played for several weddings. Outside of music, she enjoys hiking in the state park, gardening, and caring for her chickens.

Show 291, Sidney, ME
Mässig schnell, from Sonata for Harp by Paul Hindemith