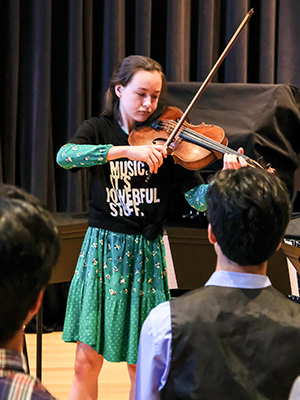 Pearl appeared as a member of the San Diego Youth Symphony Chamber Orchestra on Show 371 in La Jolla, California in April of 2019.

Pearl de la Motte (viola), 15,  is currently in the ninth grade at the Valiant Prep Homeschool and currently studies viola and violin with Michael and Irina Tseitlin. Pearl started playing the violin at the age of two; at eleven, she began to play viola and soon fell in love with its deep and expressive tone. Two years later, she won her first concerto competition and had the opportunity to play with the New City Sinfonia. Since then, she has entered and placed in numerous competitions; and, in January 2019, she won first prize in the Young Artist Competition held by the La Jolla Symphony & Chorus.

Pearl was chosen by the director of the San Diego Youth Symphony to participate in a community engagement program with Vijay Gupta, and she hopes to attend the pre-college division of the San Francisco Conservatory of Music in the fall.

Pearl, who is one of nine kids, is currently teaching violin to her four-year old-sister and two-year old-brother. She also enjoys knitting and crocheting gifts for her friends and siblings, and she has won awards for her knitting creativity.