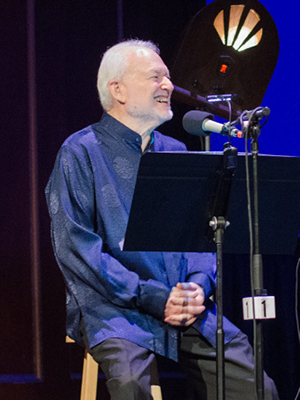 Paul Katz was the Guest Host on From the Top Show 375 at New England Conservatory’s Jordan Hall in Boston on July 31, 2019.

Paul Katz is known to concertgoers the world over as cellist of the Cleveland Quartet, which, during an international career of 26 years, made more than 2,500 appearances on four continents. As a member of this celebrated ensemble from 1969 to 1995, Katz performed at the White House and on many television shows, including “CBS Sunday Morning,” NBC’s “Today Show,” “The Grammy Awards” (the first classical musicians to appear on that show), and in “In The Mainstream The Cleveland Quartet,” a one-hour documentary televised across the U.S. and Canada.

Katz has received many honors, the most recent including the “Chevalier du Violoncelle,” awarded by the Eva Janzer Memorial Cello Center at Indiana University for distinguished achievements and contributions to the world of cello playing and teaching; The Richard M. Bogomolny National Service Award, Chamber Music America’s highest honor, awarded for a lifetime of distinguished service in the field of chamber music; an Honorary Doctorate of Musical Arts from Albright College; and the American String Teacher’s Association “Artist-Teacher of the Year 2003.” Katz is a passionate spokesperson for chamber music the world over, and served for six years as President of Chamber Music America. As an author, he has appeared in numerous publications and wrote the liner notes for the Cleveland Quartet’s three-volume set of the complete Beethoven Quartets on RCA Red Seal.

In 2011, declaring that “our art is passed from one generation to the next, not by books but by mentoring,” Katz launched CelloBello, a website designed to connect cellists of all ages and performance levels. Among the site’s resources are “Cello Lessons,” consisting of footage filmed in Katz’s studio with NEC students; “Legacy” videos from Katz’s own mentors; and a blog coauthored by more than a dozen prominent cellists. Through this medium, Katz is digitizing his own life experience as a student, teacher, and artist of his instrument.

Katz has appeared as soloist in New York, Cleveland, Toronto, Detroit, Los Angeles, and other cities throughout North America. He was a student of Gregor Piatigorsky, Janos Starker, Bernard Greenhouse, Gabor Rejto and Leonard Rose. In 1962, he was selected nationally to play in the historic Pablo Casals masterclass in Berkeley, California. He was a prizewinner in the Munich and Geneva Competitions and for three summers, he was a participant at the Marlboro Music Festival.

Katz’s recordings include Dohnanyi’s Cello Sonata for ProArte Records, and the Cleveland Quartet’s recording on Sony Classical of the Schubert two-cello quintet with Yo-Yo Ma. The Cleveland Quartet has nearly 70 recordings to its credit on RCA Victor, Telarc International, Sony, Philips and ProArte. These recording have earned many distinctions including the all-time best selling chamber music release of Japan, 11 Grammy nominations, Grammy Awards for Best Chamber Music Recording and Best Recorded Contemporary Composition in 1996, and “Best of the Year” awards from Time magazine and Stereo Review.

In September of 2001, Paul Katz joined the New England Conservatory faculty, following five years at Rice University in Houston, and twenty years of teaching at the Eastman School of Music. At NEC, in addition to his studio, seminar teaching and other chamber music coaching, and coaching the NEC Chamber Orchestra, he is founder of the Professional String Quartet Training Program. To date, this program has enrolled six emerging quartets, all of which are now experiencing considerable professional success, including a Grammy award for the Parker Quartet’s 2010 Ligeti CD.

Katz has mentored many of the fine young string quartets on the world’s stages today including the Ariel, Biava, Cavani, Chester, Harlem, Jupiter, Kuss, Lafayette, Maia, Meliora, Parker, T’ang, and Ying Quartets. One of America’s most sought after cello teachers, his cello students, in addition to membership in many of the above quartets, have achieved international careers with solo CDs on Decca, EMI, Channel Classics and Sony Classical, have occupied positions in many of the world’s major orchestras including principal chairs as far away as Oslo, Norway and Osaka, Japan, and are members of many American symphony orchestras such as Buffalo, Chicago, Cleveland, National Symphony, Pittsburgh, Rochester, and St. Louis.

Katz has taught at many of the major summer music programs including twenty years at the Aspen Festival, the Yale Summer School of Chamber Music, the Perlman Music Program, the Schleswig-Holstein Music Festival in Germany, ProQuartet in France, Domaine Forget, Orford, and the Banff Center for the Arts in Canada, the Steans Institute of The Ravinia Festival, and is a Director of the Shouse Artist Institute of the Great Lakes Chamber Festival. His hundreds of masterclasses worldwide include many of the major music schools of North and South America, Europe, Israel, Japan and China. Katz frequently sits on the juries of international cello and chamber music competitions, most recently the Leonard Rose International Cello Competition, and the international string quartet competitions of Banff, London, Munich, Graz and Geneva.