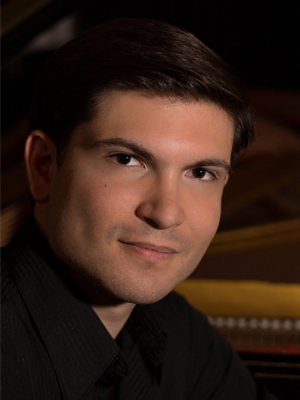 Patricio Molina appeared on Season 2 of From the Top at Carnegie Hall on PBS at age 18.

Patricio Molina (piano), 18, is a senior at Passaic Valley High School in West Paterson, New Jersey. Having recently moved to the United States from Chile, Patricio studies piano at the Manhattan School of Music with Marc Silverman. He also loves tennis, soccer and ping pong.

Patricio’s talents have been recognized by a number of people, institutions and competitions, including The New York Times which described him as “a gifted young artist” when they heard his performance on the Symphony Space “Wall-to-Wall Stravinsky”. The Chilean University was quick to recognize his talents when at the age of four Patricio was invited to attend college on a scholarship by ¨Amigos del Teatro Municipal¨.

A musician, Chilean-native pianist, composer and church organist and conductor, Patricio Molina has appeared in a wide range of venues around the world including New York’s Carnegie Hall, Borden Auditorium at the Manhattan School of Music, New Jersey Performing Arts Center (NJPAC), the Teatro Municipal of Chile, Odeon Amphitheater in Jordan and in TV media; PBS and Chilean National TV, among others.

As a pianist, Patricio has been invited by NJPAC to play prelude concerts for Lang Lang, Anne Sophie Mutter, Lorin Maazel, The New York Philharmonic, Jacques Lacombe, The New Jersey Symphony Orchestra and he has performed for President Bachelet of Chile, King Abdullah of Jordan and Pavarotti. Patricio has also appeared as a soloist with orchestras in Chile, in the Middle East and in the United States. His album “From Los Andes to The Alps” features the music of Schumann and Brahms and is now available on iTunes.

As a music director, Patricio now enjoys the position of Music Minister at Immaculate Conception Church in Mahwah, New Jersey where he writes new music for the children and adult choirs.

Patricio has been a strong advocate to the music of Chile and Spain. He is currently working on an album consisting of piano music by Spanish and Chilean composers and he is writing a piano concerto with Latin American flavors.