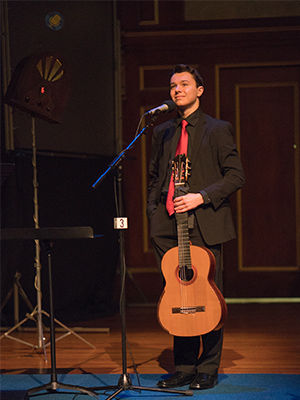 Nolan Harvel (guitar), 15, is from Brentwood, Tennessee, and is a freshman at Ravenwood High School. He studies with John Johns at Vanderbilt University as a Myra Jackson Blair Scholar as well as Dr. Andrew Zohn. His musical path began at age 4 with Suzuki violin studies. Since taking up guitar, Nolan has won numerous guitar competitions and scholarships throughout the US, from Columbus State University’s Annual Guitar Symposium to Pepperdine University’s International Young Guitarist Competition, and more. In 2015, Nolan was featured on Nashville NPR’s Live in Studio C, hosted by Will Griffin. His love of music expands to violin and singing as well. Outside of music, Nolan enjoys competitive robotics.