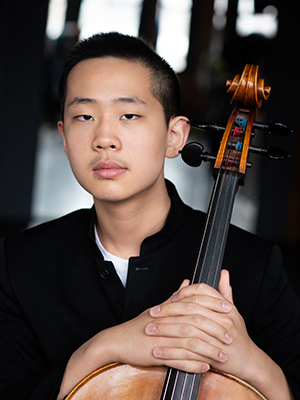 Noah Chen (cello), 17, from Chicago, Illinois, attends the Pre-College Division of the Juilliard School, where he studies with Clara Kim. An avid chamber musician as well as a soloist, Noah regularly performs with the Chen Family String Quartet. As a soloist, Noah has performed with the Oistrakh Symphony of Chicago, the CYSO, and the Sinfonietta DuPage. In recital, he has performed in Weill Recital Hall at Carnegie Hall, Paul Hall at the Juilliard School, Merkin Concert Hall, Nichols Hall at the Music Institute of Chicago, the Dumbarton House, and Harris Concert Hall. He is the former Principal Cello of the Chicago Youth Symphony Orchestra and the Juilliard Pre-College Orchestra. He has been a guest on WFMT’s Introductions several times. Noah plays on an English cello made by William Forster in 1800.