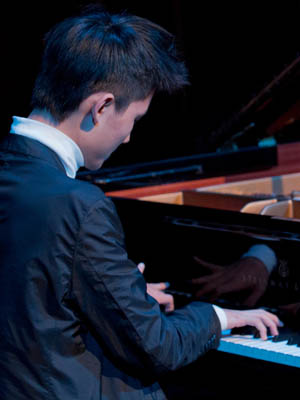 Niu Niu (piano), 16, is the affectionate nickname of Zhang Shengliang. Originally from China, he is currently studying at Walnut Hill School for the Arts with Tema Blackstone and Hung-Kuan Chen. After making his concert debut at the age of 6, he became the youngest student in the Shanghai Conservatory’s 81-year history. He was presented in recital at Wigmore Hall in London in 2006 and a year later returned to perform at the Pearl Awards. At age 10, Niu Niu became an exclusive recording artist for EMI – the youngest pianist to be signed to a major label. At age 12, he became the youngest artist in the world to have recorded all of Chopin’s Etudes. He was also awarded the Prix Montblanc for most talented young artist in Europe, and at the Festival der Nationen in Germany he received the Festival’s prize for Young Artist of the Year.