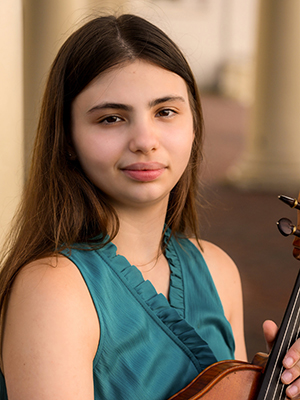 Nicolette Sullivan-Cozza (viola), 18, hails from Hockessin, Delaware. She is a freshman at New England Conservatory studying under Kim Kashkashian on a Dean’s full scholarship. Previously, she was a student of Kerri Ryan. She is a laureate in numerous competitions such as the American Viola Society Biannual Solo Competition, the Delaware Concerto Competition for young Musicians, VSA International Young Soloists Competition, the Catholic University of America Young Artist Competition, the IU Jacobs School of Music Summer String Academy Concerto Competition and the American Protege International Piano and Strings Competition and is a recipient of a Sphinx MPower Grant. Ms. Sullivan-Cozza held positions as the Principal Violist of the Philadelphia Youth Orchestra and the New England Conservatory of Music Symphony Orchestra and Assistant Principal in the Boston Philharmonic Youth Orchestra. She is an alumni of PMAY (Philadelphia Music Alliance for Youth) and the Primera Fund.