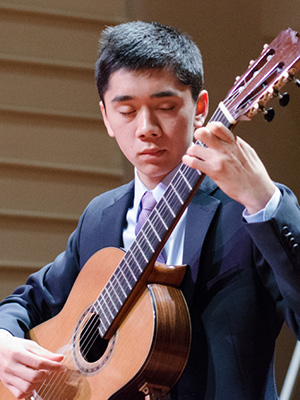 Nicholas will perform on Show 353 at the San Francisco Conservatory of Music on March 4, 2018.

2018 BIO: Nicholas Padmanabhan, (guitar), age 17, is from Palo Alto, Calif., where he attends Palo Alto High School. He was a winner of both the 2018 and 2017 National YoungArts Foundation competitions. Nicholas was the first-place winner in the Sierra Nevada Guitar Competition in both 2016 and 2014 and also took first place in the 2016 California statewide guitar competition of the  American String Teachers Association. He was runner-up in the 2017 Mondavi Center Young Artists Competition, where he was also awarded the Bouchaine Young Artists Award for Festival Napa Valley. Nicholas is a student of Scott Cmiel at the San Francisco Conservatory of Music’s Pre-College Division. Outside of the guitar, Nicholas enjoys chemistry, physics, going out with friends, and watching sci-fi and action movies.

Nicholas performed on Show 301 as part of the San Francisco Conservatory Guitar Quartet, recorded in February 2015.

From the Top · The 24 Strings Quartet