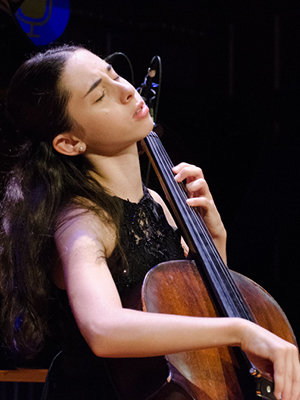 Nahar Eliaz (cello), 13, from Savyon, Israel, began cello lessons at age five with Mrs. Bluma Sarid. Since 2017, she studies with Prof.  Hillel Zori, from the Tel Aviv Music Academy. Nahar won the scholarship of the American Israel Culture Foundation. She has represented the Israel Conservatory in chamber music, string orchestra, and soloist events. In May 2016, she was invited by Itzhak and Toby Perlman to study at the Juilliard School of Music. In March 2018, she joined the Perlman Music Program in Israel. In 2017, she gave a series of concerts for the Zfunot Culture organization with the winners of the Arthur Rubinstein Young Competition in Israel, and was invited to perform at the Prime Minister’s office in a ceremony honoring Mr. Itzhak Perlman with the Genesis Prize.  Nahar won first prize with highest honors in the scholarship competition of the Israeli Conservatory, and received a one-month scholarship for Morningside Music Bridge (MMB). She won first prize in the final concerto competition of MMB 2017 in Boston and she won second prize at MMB 2018 in Warsaw.  Nahar has taken master classes and lessons with Prof. Laurence Lesser, Prof. Paul Katz, Andres Diaz, Peter Stumpf, and from teachers in music academies in Poland and China.  In December 2017, Nahar joined the Jerusalem Music Center and in 2018 she was invited twice by the Center to give a solo and chamber music concert in London couched by Murry Perahia. Last month, Nahar performed a solo recital at Kol Hamusika Radio Station.