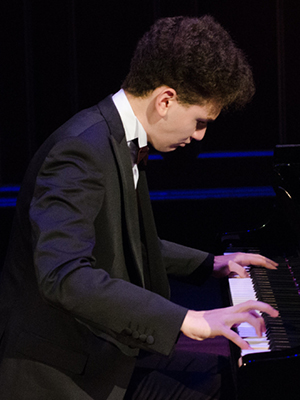 Mohammad Alsheikh (piano), 16, hails from Ramallah, West Bank, Palestine. Born in Saratov, Russia in 2003, he began trying different instruments at age nine at the Barenboim Said Foundation School in Ramallah, Palestine. A year later, he started playing on piano with Emma Spitkovsky at the Magnificat Institute for Music in Jerusalem.

Mohammad has performed in different cities including Turin, Venice, and Budapest. He participated in the XII International Festival “Moscow meets Friends” under the direction of Vladimir Spivakof, appeared on the Israeli Educational program “Intermezzo with Arik” in 2015 where he performed and was interviewed by Prof. Arie Vardi, gave recitals in Tel-Aviv, took a part in the third and fourth Trans-Siberian Art festival where he played with different orchestras in Tel-Aviv and Novosibirsk. Mohammad has also participated in Tel-Hai piano masterclasses, in Morningside Music Bridge (MMB) masterclasses in Warsaw and in Boston, was awarded scholarships by Zefunot Culture, and had masterclasses with many teachers and professors including Murray Perahia and Daniel Baremboim.