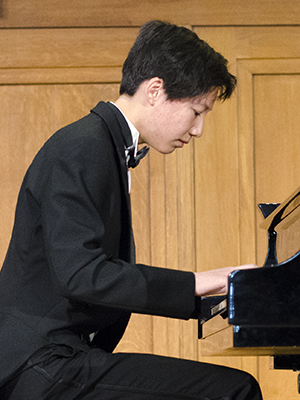 Max Wang (piano), 15, from Princeton, New Jersey, is a recipient of From the Top’s Jack Kent Cooke Young Artist Award. He is a sophomore at West Windsor-Plainsboro High School South. Max studied piano under Mrs Chiu Tze Lin for seven years before he began studies with his current teacher Beatrice Long last year. A finalist in the children’s division at the Albert M. Greenfield Concerto Competition, he made his concerto debut with the Bravura Philharmonic at 11, his Carnegie Hall debut at 8, and was named the 2017 Harmony for Peace Junior Peace Ambassador. A prizewinner in numerous local, national, and international competitions, he was featured on WRTI after winning the Steinway Junior Competition in Philadelphia. Max has attended programs at Curtis Summerfest and the Bowdoin Music Festival. He is a Presidential Volunteer Service Gold Award recipient and dedicates his time to the community by organizing performances in hospitals and retirement homes. Max also plays the oboe as a second instrument. Outside of music, he loves to read, run, tutor younger kids, go on Coursera/TedEd, and commit time to his school’s Model UN club.