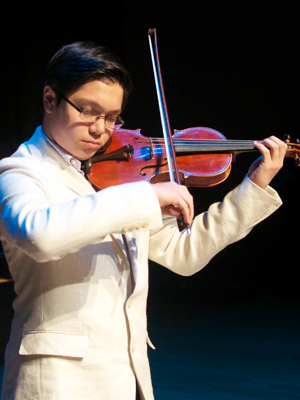 Violinist Matthew Hakkarainen began his studies at the age of three years in Florida with Maree Sawhney and Professor Huifang Chen. He has been a consistent winner every year at the Florida Federation of Music Clubs (FFMC) Junior Convention since the age of five including winning the prestigious Irene Muir award for best overall performance, and has performed as a featured soloist in the FFMC Awards Ceremony. Matthew currently studies with Professor Mauricio Fuks of the Jacobs School of Music at Indiana University and Borislava Iltcheva, Concertmaster of the Baton Rouge Symphony. Matthew has also studied music composition with renowned composer Donald Waxman in Boca Raton, Florida. He has won many state and national competitions including grand prize at the Bach Festival Society Young Artist Competition held at Rollins College, third place in the Alhambra Concerto Competition, first place in the Florida State Music Teachers’ Association (FSMTA) Junior Performance Competition, and first place in the American Protégé International Concerto Competition where he performed as a soloist at Carnegie Hall in New York City. He also won the Southern Division of the Music Teachers’ National Association (MTNA) Junior Performance Competition, and was a national finalist at the MTNA National Competition held in Chicago, Illinois. Furthermore, he was selected as an international third round finalist at the Louis Spohr Competition for Young Violinists held in Weimar, Germany. Matthew has attended the Indiana University Jacobs School of Music Summer Program, the “Be Better with Bergonzi” Chamber Music Festival, the Music@Menlo Chamber Music Festival, the Meadowmount School of Music, and the Ferme de Villefavard Summer Academy of Music. He performed as a soloist with Maestro Peter Fuchs and the Hallandale Symphonic Pops Orchestra and was featured on National Public Radio’s “From the Top” and “Classical Connections.” He also performed as a soloist with the Alhambra Orchestra under the direction of Maestro Alfred Gershfeld, the Sugar Pops Orchestra with Maestro Peter Fuchs, the Jacksonville Symphony with Dr. Ronn Cummings, and the New River Orchestra with Maestro Peter Fuchs. Matthew was also selected as the Concertmaster of the All-State 7th/8th Grade Florida Orchestra for two consecutive years and was selected again as Concertmaster of the All-State 9th/10th Grade Florida Orchestra this past year. In addition, he serves as the Concertmaster of the Florida Youth Orchestra’s Principal Orchestra. He has performed in masterclasses with many internationally esteemed musicians including Alexander Sitkovetsky, Zvi Zeitlin, Gerardo Ribeiro, Ida Haendel, Alexander Kerr, Kimberly Fischer, Roberto Davidovici, Daniel Andai, Charles Castleman, and others. He is currently in ninth grade and is in his freshman year at the Alexander W. Dreyfoos School of the Arts in West Palm Beach, Florida. Matthew hopes to pursue a successful career in music as a performer, conductor, and composer.

Show 305, Miami, FL
Praeludium and Allegro in the style of Pugnani by Fritz Kreisler