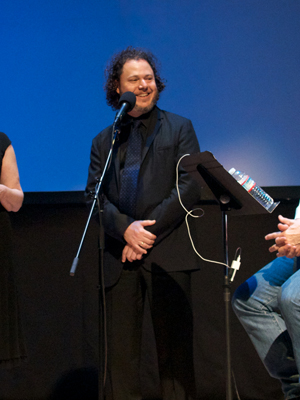 Matt Haimovitz (cello) has inspired classical music lovers and countless new listeners by bringing his artistry to concert halls and clubs, outdoor festivals and intimate coffee houses, any place where passionate music can be heard. He brings a fresh ear to familiar repertoire, champions new music and initiates groundbreaking collaborations as well as creating innovative recording projects for Oxingale Records. He has a tireless touring schedule as well all while mentoring an award-winning studio of young cellists at McGill University’s Schulich School of Music in Montreal. Haimovitz made his debut in 1984, at the age of 13, as soloist with Zubin Mehta and the Israel Philharmonic.  At 17, he made his first recording with James Levine and the Chicago Symphony Orchestra, for Deutsche Grammophon. The solo cello recital is a Haimovitz trademark, both inside and outside the concert hall. In 2000, he made waves with his Bach “Listening-Room” Tour, for which, to great acclaim, Haimovitz took Bach’s beloved cello suites out of the concert hall and into clubs across the U.S., Canada, and the U.K. Haimovitz’s 50-state Anthem tour in 2003 celebrated living American composers, and featured his own arrangement of Jimi Hendrix’s “Star-Spangled Banner.” He was the first classical artist to play at New York’s infamous CBGB club, in a performance filmed by ABC News for “Nightline UpClose.” Haimovitz’s recording career encompasses more than 20 years of award-winning work on Deutche Grammophon and his own Oxingale Records, the trailblazing independent label he founded with composer/producer Luna Pearl Woolf. Two recent Oxingale albums have been nominated for Juno Awards and the latest release Meeting of the Spirits was nominated for a GRAMMY® for Best Classical Crossover Album and won a GRAMMY® for Best Producer of the Year (Classical). In 2006, Haimovitz received the Concert Music Award from ASCAP for his advocacy of living composers and pioneering spirit, and in 2004, the American Music Center awarded Haimovitz the Trailblazer Award, for his far-reaching contributions to American music. Born in Israel, Haimovitz has also been honored with the Avery Fisher Career Grant (1986), the Grand Prix du Disque (1991), the Diapason d’Or (1991) and he is the first cellist ever to receive the prestigious Premio Internazionale “Accademia Musicale Chigiana” (1999). Haimovitz studied at the Collegiate School in New York and at the Juilliard School, in the final class of Leonard Rose, after which he continued his cello studies with Ronald Leonard and Yo-Yo Ma. In 1996, he received a B.A. magna cum laude with highest honors from Harvard University. Matt Haimovitz plays a Venetian cello, made in 1710 by Matteo Gofriller.