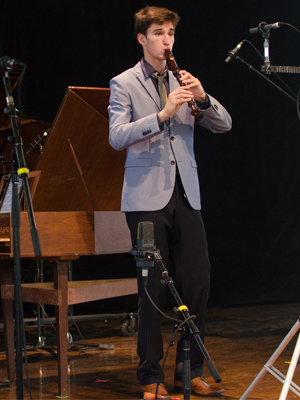 Martin Bernstein (recorder), 17, is from Brooklyn, New York, where he attends Hunter College High School. He is currently a student of Nina Stern, and he began studying the recorder at age 5 with local jazz pianist Charles Sibirsky. Martin won the 2013 National Young Performers Recorder Competition hosted by Piffaro and the 2014 International Mieke van Weddingen Competition (under 21 division) in Leuven, Belgium. He has attended Oberlin’s Baroque Performance Institute, the Amherst Early Music Festival, the Boston Early Music Festival, the International Baroque Institute at Longy, and the Corso Internazionale di Musica Antica, Urbino. Outside of music, Martin enjoys math, baseball, and acting in Shakespeare’s plays.

From the Top · Martin Bernstein, recorder

From the Top · Martin Bernstein, recorder