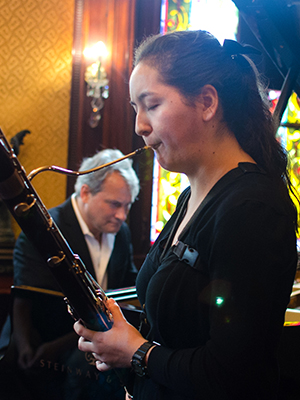 Margaret O’Leary, 18, bassoon, is from Claremont California. She recently graduated from Claremont High School, and will be attending the Curtis Institute this fall. She has been an active concert bassoonist in the past, performing with the Claremont Young Musicians Orchestra as both principal bassoon as well as soloist as their concerto competition winner in 2013. In 2015, she was named one of 20 musician finalists in the National YoungArts program, where she performed at the New World Center in South Beach, Florida in the annual chamber concert, and took part in a series of Master Classes with YoungArts Master Teachers. Outside of music, Maggie enjoys reading, exercising, art and poetry.