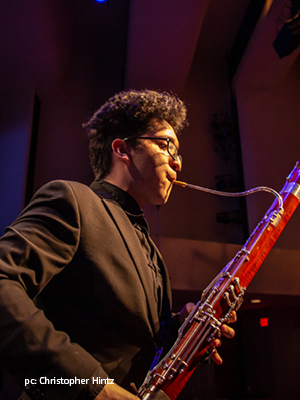 Luis Marquez Teruel (bassoon), 17, is originally from Maracaibo, Venezuela and attends the Interlochen Arts Academy, where he studies with Dr. Eric Stomberg. He is a recipient of From the Top’s Jack Kent Cooke Young Artist Award. Luis began bassoon at age ten and just one year later he was selected to play with the National Children’s Orchestra of Venezuela in an Austrian tour, conducted by Sr. Simon Rattle. In 2016 he toured Europe with the Simon Bolivar Symphony Orchestra of Venezuela and Gustavo Dudamel. In 2018, Luis was a concerto competition winner at both the Interlochen Arts Academy and Interlochen Arts Camp. His favorite musical experience has been attending a bassoon festival in Bogotá, where he enjoyed masterclasses and learning from many teachers. Luis enjoys having fish as pets and finding ways to improve bassoon reeds using physics and math.

Show 368, Interlochen, MI
II. Allegro scherzando from the Sonata for Bassoon and Piano by Camille Saint-Saëns (1835-1921), with Michelle Cann, piano