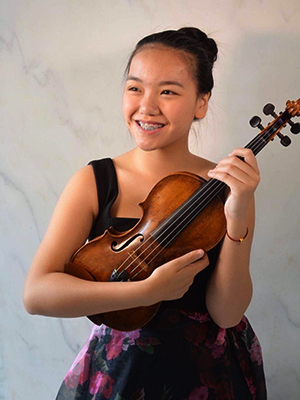 Liyu Chen (violin), 17, from Bayside, New York, is a senior at Queens High School for the Sciences at York College. They have been studying violin at Juilliard Pre-College with Masao Kawasaki since 2016 and were recently named a 2022 YoungArts Winner in Classical Music. Liyu is a recipient of the J and S Berger Scholarship, MOCA Foundation Scholarship, and the ET Family Scholarship from the Juilliard School, and was awarded First and Grand Prize at the 2018 Sound of Manhattan Festival and Competition. During the summer of 2019, Liyu had the opportunity to attend the 38th LIU Post Chamber Music Festival and received First Prize in its concerto competition. As a result, they had the opportunity to perform with the Festival Chamber Orchestra under the baton of Dr. Susan Deaver. In 2020, Liyu was awarded Second Prize in the chamber music division at the International Grande Music Competition, and took first place in the Strings4Smiles “Quaran-teen Competition” for Medical Workers. Liyu enjoys performing as well as engaging in community service. This includes performances in the Tenafly Concert Series in New Jersey, First Fridays at the Jamaica Center for Arts and Learning, and taking part in a fundraiser for the Great Neck Social Center (raising over $10,000). An avid chamber musician and orchestral player, Liyu is currently the Media Chair as well as a Young Artist within the ensemble “Forte”, a group of musicians from Columbia University, The Juilliard School, and the Columbia-Juilliard Exchange. Outside of music, Liyu enjoys playing Tetris and chess, and cooking.