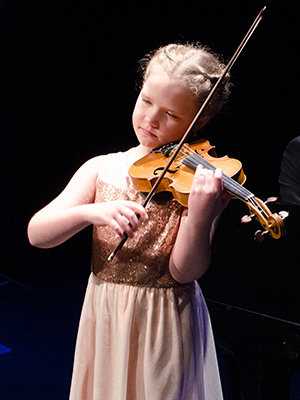 Lilyanne Thoroughman (violin), 10, is from Williamstown, Kentucky, and studies violin with Kurt Sassmannshaus at the College-Conservatory of Music at the University of Cincinnati. Lilyanne is a member of Starling Chamber Orchestra and played six concerts in southern China with the group. She has been invited to solo with the Kentucky Symphony and Blue Ash Montgomery Symphony. In her free time, Lilyanne enjoys dancing ballet: she received her first pair of pointe shoes this year. She also loves to play with her sister in the woods.