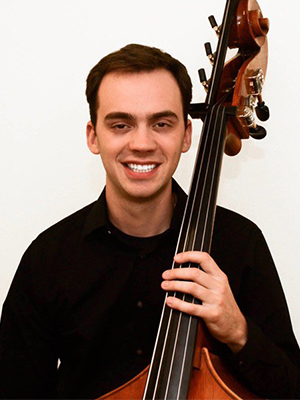 During the course of his studies, Keiran transitioned from studying violin to bass. In April 2014, Kieran became a faculty member at the Fredonia State University of New York Music Department. Learn more.

The inscription “All Things Bass,” on Kieran J. Hanlon’s business card, certainly begins to tell the story of this versatile bassist. Kieran is a first call performer in both the classical and jazz idioms, and enjoys a diverse career in both genres (among others) across Upstate New York and Pennsylvania.

In May 2014, Kieran completed a M.M. Degree in Double Bass Performance at the Eastman School of Music with Professor of Double Bass James VanDemark. He also completed Eastman’s Orchestral Studies Program, in which he won an audition to play as an intern for two seasons with the Rochester Philharmonic Orchestra. Kieran’s undergraduate studies were completed at The University of Michigan School of Music, Theatre and Dance in April of 2012, where he studied classical repertoire with Professors Diana Gannett and Stephen Molina and jazz with Professor Robert Hurst. He holds a B.M. in Double Bass Performance and a B.F.A. in Jazz Studies, Bass from Michigan. He also won third place in the Orchestral Competition at the International Society of Bassists 2013 Convention in Rochester, NY.

Kieran works frequently as a substitute double bassist for both the Rochester and Buffalo Philharmonic Orchestras, and traveled to Carnegie Hall with the Buffalo Philharmonic in May of 2013 to join the orchestra for its appearance at the Spring For Music Festival. The program featured Reinhold Gliere’s Symphony No. 3 “Il’ya Muromets” which was also recorded by the BPO Carnegie Hall tour personnel on the Naxos label.

In addition to his work with the RPO and the BPO, Kieran is involved in numerous regional orchestras in Upstate New York and Pennsylvania. He was invited to play both the Symphonic and Pops Series with the Erie Philharmonic Orchestra (PA) for the 2014/15 Season, as well as the Orchestral Series with the Cayuga Chamber Orchestra in Ithaca, NY for 2014/15. He also appears frequently with the Binghamton Philharmonic, and joined the CMAC Symphony Orchestra in Canandaigua, NY for a concert with singer Josh Groban in August of 2014.

Kieran has performed by invitation with the Canandaigua Lake Chamber Music Festival in July of 2014, for two seasons with the Lake George Music Festival in August of 2013 and 2014, and with the Gateways Music Festival in 2013. He also spent the summer of 2011 as a Rotating Principal Bassist with the National Repertory Orchestra in Breckenridge, CO. In 2013, Kieran worked extensively with the chamber choir Madrigalia in Rochester, NY on cross-genre compositions and arrangements for choir and chamber ensemble by composers John Rutter and Cary Ratcliff among others. He will join the choir again this fall, and will be featured on an upcoming recording.

Kieran joined the faculty at The State University of New York at Fredonia’s School of Music in April of 2014, and is a private teacher in the Rochester area as well with a studio of 12 students. He has also taught for the Eastman School of Music’s Community School with Eastman Keuka, a summer program, and the adult music education institution, New Horizons.