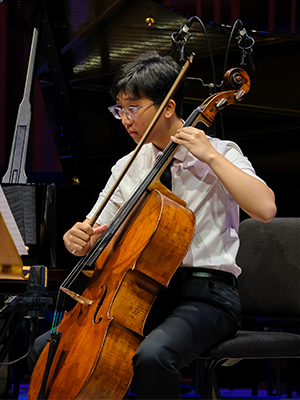 Kevin Song (cello), 16, lives in San Diego, California and attends Torrey Pines High School. He currently studies with Ms. Sarah Koo Freeman. At age 9, he made his solo concert debut performing David Popper’s Hungarian Rhapsody with the Fullerton College Orchestra. Since then, he has appeared in venues around the world including Austria, Germany, Estonia, Finland, and Russia. In 2016, Kevin was featured as a soloist on From the Top. Kevin is an assistant principal cellist in the San Diego Youth Symphony (SDYS) and the 2018-19 winner of the SDYS Ovation Concerto Competition, and will perform as a soloist with SDYS in June 2019. This summer, he has been invited to join the National Youth Orchestra of the United States. In his free time, Kevin teaches cello to individuals with special needs, folds origami, and enjoys time with his family and friends.

Kevin Song , 13, is from Irvine, California, and attends Sierra Vista Middle School and studies cello with Sarah Koo. He was the American String Teacher Association solo finalist for 2013, and performed for the Irvine Unified School District Board Presentation for Excellence in Education Enrichment as a result. He also placed first in the Los Angeles Violincello Society competition, and participated in a master class with Ralph Kirshbaum. In his free time, he likes to play Pokémon, fold origami, tinker with small machines, and read up on Greek mythology.