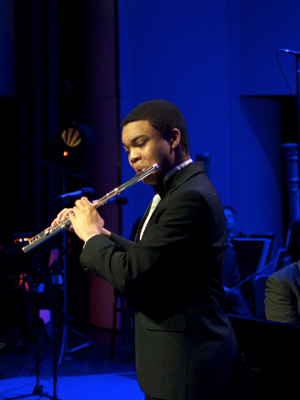 Kennedy Wallace (flute), 17, is from Dallas, Texas, but currently attends the Interlochen Arts Academy in Interlochen, Michigan, where he studies with Nancy Stagnitta. He is a recipient of From the Top’s Jack Kent Cooke Young Artist Award. Kennedy performs in the Interlochen Arts Academy Orchestra as well as with a wind quintet and a flute quartet. He has participated in numerous Texas honor bands and received top ratings in Texas State Solo-Ensemble Contests. Kennedy recently volunteered for an organization called Reading Partners, to help youth in his area become better readers, and for the Sierra Club, to help clean up the forests of Texas.