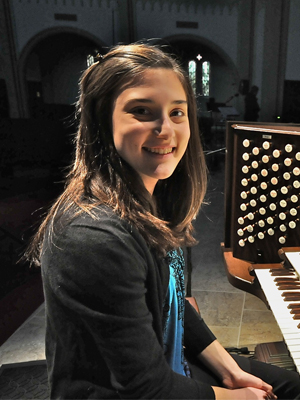 Karen Christianson (organ), 15, comes from Media, Pennsylvania and is a sophomore at The Episcopal Academy in Newtown Square. She made her organ performance debut at historic Christ Church in Philadelphia at age 7, and since then has performed in numerous venues in the United States and Europe, including Notre Dame in Paris, France. Karen studies organ with Alan Morrison, head of the organ department at the Curtis Institute of Music in Philadelphia. She’s also a budding composer, and since 2006 her original choral compositions have won national and regional awards. In her free time Karen enjoys sailing, playing soccer, participating in her school’s science fairs, and learning more about her Greek heritage.

From the Top · Karen Christianson, Organ