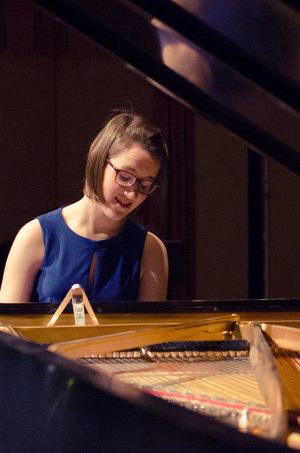 From the Top has commissioned a new piece from Karalyn as part of their 2018 #Note4Note Campaign!

Program Bio from Show 325:
Karalyn Schubring (composer), 17, is from Gilbert, Arizona, and attends Chandler Preparatory Academy. Karalyn’s appearance on From the Top is made possible with support from the ASCAP Foundation Irving Caesar Fund. She is currently studying composition with Daron Hegan. She has been featured in the Yamaha International Junior Original Concert, performing her own compositions, and has won the ASCAP Morton Gould Young Composer’s Competition in 2014 and 2015. Karalyn will be attending the University of Michigan School of Music, Theatre, and Dance in the fall as a composition major. When not composing and practicing, she loves hanging out with her friends and family, riding her bike, and watching movies.

Show 325, El Paso, TX
“Song of the Ancients” for Euphonium and Piano by Karalyn Schubring