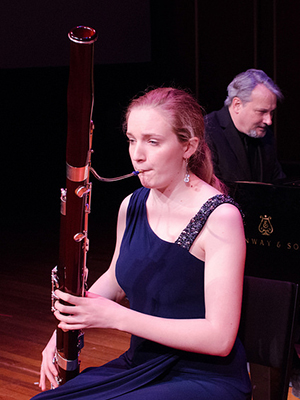 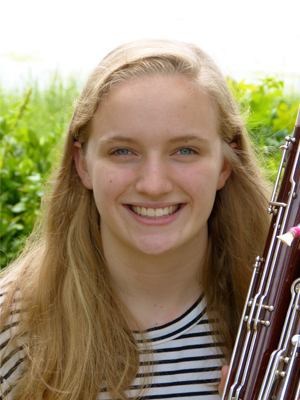 Julianne Mulvey (bassoon), 17, is from Reading, MA where she is a senior at Reading High School. She currently studies with Richard Svoboda of the Boston Symphony Orchestra and performs with the Boston Youth Philharmonic Orchestra and in the New England Conservatory Preparatory Chamber Music program. Her favorite musical experience was when she performed at Goddard House in Brookline through From the Top’s Center for the Development for Arts Leaders and had a sing-along to Elvis’ “Can’t Help Falling in Love” with the residents. Outside of the bassoon, Julianne enjoys playing the ukulele and playing with her puppy Mikey.

JULIANNE MULVEY began her musical studies on flute with her mother and then made the wise decision to switch to the instrument of her dreams, the bassoon. Julianne is 17 years old and in her senior year at Reading Memorial High School. She is a student of Richard Svoboda, the principal bassoonist of the Boston Symphony, and a member of the Boston Youth Philharmonic Orchestra. In the spring of 2016, Julianne won second prize in the Harvard Musical Association’s High School Achievement Awards. She spent the summer of 2016 in Brevard, North Carolina at Brevard Music Center studying with wonderful teachers from Indiana University and James Madison University. When not playing bassoon, she can be found playing her ukulele or spending time with friends. Julianne is excited to be back with CDAL for another year!

Julianne is a member of the Center for Development of Arts Leaders (CDAL) in Boston.
Class Year: 2017