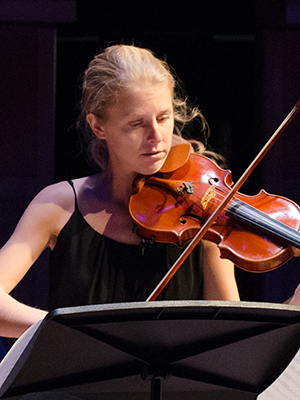 Josie first appeared on Show 215 when she was 18 years-old. She most recently returned to From the Top on Show 379 recording in Portland, Maine on November 20, 2019.

Josie Davis (violin) received her undergraduate degrees in violin and sociology at Oberlin College and Conservatory where she was a student of David Bowlin, and her Ed.M from Harvard University. She has performed in a wide-range of venues from Carnegie Hall to the Monte Music Festival in India and has appeared with her sister on NPR’s From the Top at Merrill Auditorium with Portland Ovations. She actively explores ways to share classical music in new contexts and has performed chamber music with Emanuel Ax in a taco shop, played solo Bach for Chris Thile, and is currently a member of Palaver Strings. Her teaching has brought her to Panama, India and Community MusicWorks in Rhode Island where she completed a two-year Fellowship. In past summers, she has studied at the Juilliard String Quartet Seminar, Bowdoin International Music Festival and Kneisel Hall Chamber Music Festival. She is committed to creating more chamber music opportunities for young people and is the founder and director of summer workshops for young people in Maine and Connecticut. As a violinist, educator and arts administrator, Josie is interested in how the arts can be used as a form of cultural empowerment to build bridges and strengthen communities. In addition to music, Josie enjoys sailing, hiking, cooking, pottery, and exploring the coast of Maine.