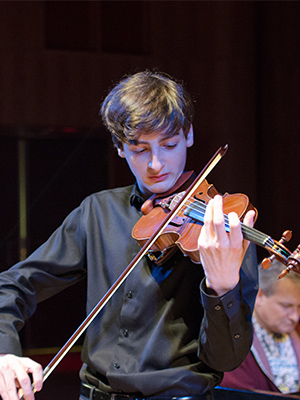 The Stradivari Society has named Joshua the recipient of a magnificent violin by Pietro Guarneri, Cremona, 1679. Read more

Joshua has also been named the 2016 Violin Grand Prize Winner of the Enkor International Competition with the highest score in the history of the competition across all ages. Read more and listen here.

Joshua Brown (violin), 16, is from Gumee, Illinois, and studies violin with Almita Vamos and Roland Vamos at the Music Institute of Chicago (MIC) Academy, where he is the 2015/2016 Alexandra C. and John D. Nichols Laureate Fellow. He has won many awards including Second Prize and the Audience Award at the 2015 Cooper International Violin Competition, Honorable Mention and the Audience Award (among other prizes) at the IX Tchaikovsky Competition for Young Musicians in Russia, and First Prize in the MIC Concerto Competition. He performs in the MIC Academy Orchestra and as part of Quartet Degas. Outside of music, Joshua enjoys playing basketball and watching the Chicago Bulls.