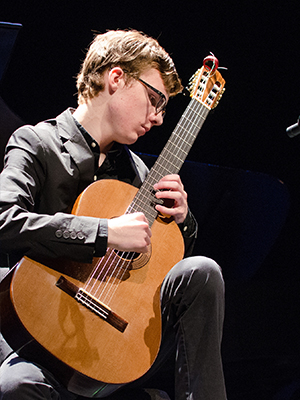 Joseph Tollefsen (guitar), 17, is from Columbia, South Carolina where he attends the St. Augustine Homeschool program and studies guitar with Marina Alexandra. Joseph placed first in the youth division of the ECU Guitarfest and third in the high school division of Boston Guitarfest. He has played in masterclasses for Alex De Grassi, Andrew York, and other guitar luminaries. In his free time, Joseph enjoys reading books by authors from Jane Austen to David Foster Wallace, playing board games, and building cigar box guitars.