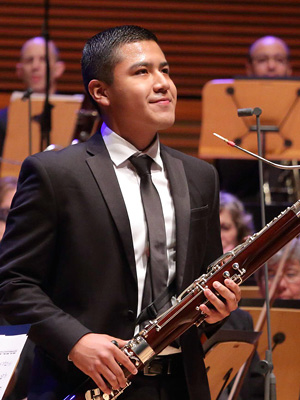 John Anthony Gonzalez (bassoon), 17, lives in Los Angeles, where he is a senior at Los Angeles County High School for the Arts. He is a recipient of From the Top’s Jack Kent Cooke Young Artist Award. John studies with Michele Grego and is a member of the Youth Orchestra of Los Angeles (YOLA). As a member of the National Youth Orchestra of the United States of America (2), John enjoyed performing side-by-side with the Philadelphia Orchestra at the Kimmel Center in Philadelphia and at Carnegie Hall under the baton of Maestro Giancarlo Guerrero from the Nashville Symphony. His favorite musical experience has been touring with 14 other members of YOLA with the LA Philharmonic to Tokyo and performing under the baton of the baton of Maestro Gustavo Dudamel. Outside of music, John enjoys basketball and snowboarding, and traveling to new places.

Show 354, Los Angeles, CA
I. Allegro from the Concerto for Bassoon and Orchestra in B-flat major, K.191/186e, by Wolfgang Amadeus Mozart (1756-1791), with the Los Angeles Philharmonic Orchestra.