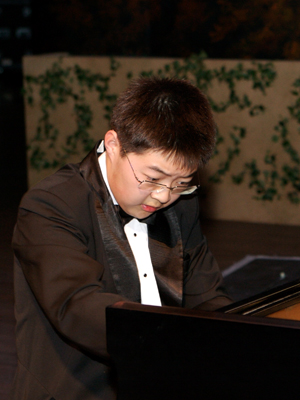 Jing appears as collaborative pianist on Show 360 recorded in Boston on October 14, 2018.

Pianist Jingxuan Zhang’s musical journey started in Beijing, wound its way through Indiana and New York, and finally brought him to Boston. He received his undergraduate degree at Columbia University and The Juilliard School, where he studied with Jerome Lowenthal, and his Master’s from New England Conservatory, under Alexander Korsantia. After graduation he remained in Boston to teach and perform. He loves to cook the Chinese food he grew up with and eat it while conversing with his friends. Now he can enjoy the Lebanese and Ukrainian cuisines of his two pianist-housemates. Otherwise, he likes to swim briefly in the frigid ocean during autumn or spring-time. Finally, he wants to share shareable things – time, music, food, and company – with others.

Jingxuan Zhang (piano), 16, was born in Beijing, China where he began taking piano lessons at the age of five. His family moved to the US in 2001, when Jingxuan was eight years old, and settled in Westfield, IN a year later. He plays the string bass in the Carmel High School orchestra and studies music with Arnaldo Cohen at the Jacob’s School of music. Through From the Top, Jingxuan recently received a Steinway piano courtesy of Rick Daigle. Now that he has a new piano, he plans to use his Young Artist Award on education, including tuition at the Jacob’s School of Music Precollege Program. When he’s not practicing, Jingxuan volunteers for the Key Club and likes to swim and read fantasy novels.