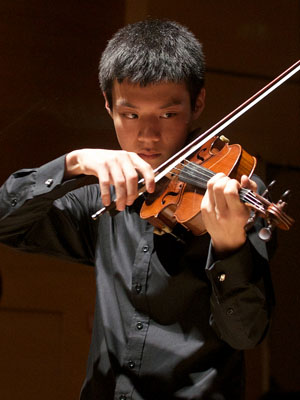 Yiliang Jiang (violin), 18, was born in the city of Wuxi in Jiangsu Province, near Shanghai. Jiang has been studying violin since age 6, and currently studies with Professor Fang Lei. Yiliang won second prize in the 20th Andrea Postacchini International Violin Competition in May 2013, becoming the youngest person to win this award. He also received the Silver Prize in the eighth Golden Bell Award in November 2011. Since 2011, Yiliang has collaborated with several celebrated orchestras including China Philharmonic Orchestra, Shanghai Philharmonic Orchestra, Qingdao Orchestra, and Wuhan Philharmonic Orchestra. He was also a violin soloist in the Final Performance of Guangzhou Symphony Orchestra’s 2012-2013 season. At school, Liang is committed to high academic standards, and takes an active part in performances and art exchanges.

From the Top · Yiliang Jiang, Violin

Show 259, Beijing, China
1.Allegro moderato from the Concerto No.1 in B-flat Major for Violin and Orchestra, K.207 by Wolfgang Amadeus Mozart with the Great Wall Soloists.