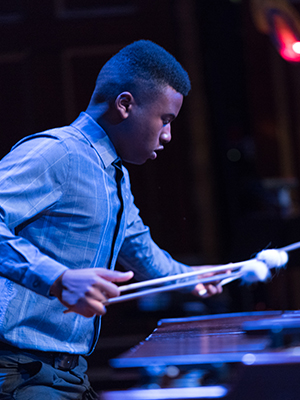 Jeremy performed on Show 400, recorded at The Colburn School in Los Angeles, California. He was also featured on Show 349 in Boston, Massachusetts.

Jeremy Davis (marimba), 20, is from Chino Hills, California and is currently pursuing a Bachelor’s Degree in Classical Percussion Performance from the University of Southern California, where he studies with Jim Babor and Joseph Pereira. Jeremy has performed on four continents with the National Youth Orchestra of the USA and has attended the Aspen Music Festival. He is currently heading into his second year as the Principal Percussionist of the American Youth Symphony.

Jeremy Davis (marimba), 17, lives in Chino Hills, California where he is a junior at Diamond Bar High School and studies percussion with Kenneth McGrath. He is a recipient of From the Top’s Jack Kent Cooke Young Artist Award. His favorite musical experience has been participating in Carnegie Hall’s National Youth Orchestra of the United States in 2017. Jeremy says his proudest musical accomplishment has been being selected to appear on From the Top. Outside of music, he enjoys playing basketball and tennis.

Show 400
Duet for any two instruments in the same key by Derrick Spiva Jr.