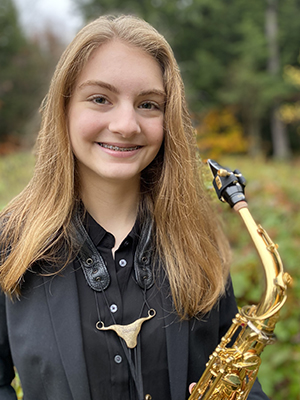 Jayme Billings (saxophone), 16, is from Underhill, Vermont and in the eleventh grade at Mount Mansfield Union High School. She studies with Kenneth Radnofsky through New England Conservatory’s Preparatory School and Steven Klimowski, Affiliate Artist at the University of Vermont. She is a member of several ensembles including the NEC Prep Saxophone Ensemble. Two of Jayme’s proudest accomplishments have been attending National Honors Ensemble in Orlando, Florida and winning All-State Scholarships for Wind Instruments as a sophomore. Outside of music, Jayme is interested in math, psychology, neurology, and sustainability.