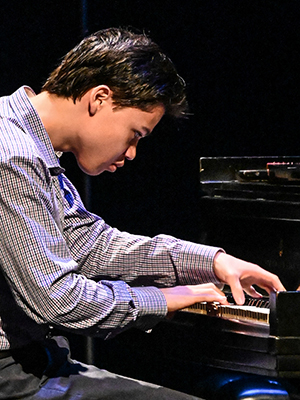 Jasper Heymann (piano), 17, from New York, New York, is a senior at the Horace Mann School. He studies piano with Elena Rossman and percussion and composition with David Rozenblatt. As a Young Scholar of the Lang Lang International Music Foundation, Jasper has performed at festivals in the United States and Europe, including a two-week residency at the Leeds Piano Festival, which included concerts and community engagement performances. As Ambassador to the charity “Concerts in Motion” for his high school, Jasper has organized performances for older adults, veterans, and people with disabilities throughout New York City. Jasper is also a principal percussionist for his high school honor band. This year, he enjoyed playing timpani for So&So Orchestra’s debut of Mahler’s First Symphony at the Brooklyn Army Terminal. His interests outside of music include aerospace and electrical engineering, physics, computer science, photography/videography, and music technology.