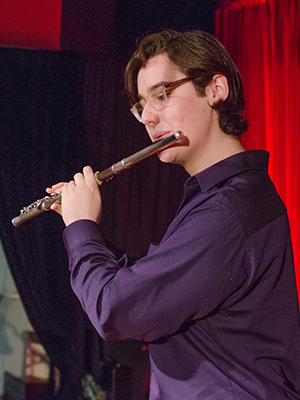 Jarrett May (flute), 18, hails from Keller, Texas and is a recipient of From the Top’s Jack Kent Cooke Young Artist Award. He is a senior at Interlochen Arts Academy in Michigan, where he studies with Nancy Stagnitta and performs in the Interlochen Arts Academy Wind Ensemble and Symphony Orchestra. Before attending Interlochen, Jarrett performed in the Greater Dallas Youth Orchestra Philharmonic, the Greater Dallas Youth Orchestra Wind Symphony, and had earned his place as a Texas Music Educators Association 6A All-State musician. Jarrett is looking forward to participating in the National Youth Orchestra of the United States this summer, a program of Carnegie Hall’s Weill Music Institute that will take him to New York and Latin America. When he’s not practicing flute, Jarrett loves trying new foods and sleeping-in on Saturday mornings.

Show 340, Atlanta, GA
III. Lively, with bounce from Duo for Flute and Piano by Aaron Copland (1900-1990), with pianist Christopher O’Riley