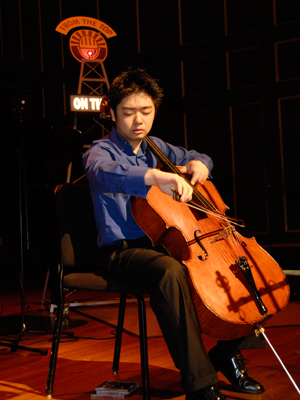 James Kim (cello), 15, is a recipient of From the Top’s Jack Kent Cooke Young Artist Award. A resident of Natick, Massachusetts, he attends the Walnut Hill School and studies cello with Laurence Lesser at New England Conservatory’s Preparatory School. James is a member of the Youth Philharmonic Orchestra, a piano trio at Walnut Hill, and sings in the Walnut Hill chorus. He was a first prize winner of the 2009 Boston Symphony Orchestra Concerto Competition. A self-proclaimed “shy guy”, he is committed to his church and loves to play ping-pong.

From the Top · James Kim, Cello