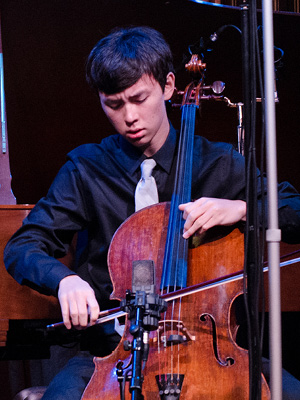 Jack Boettcher, 17, (cello) is from Naperville, Illinois, where he is a senior at Naperville North High School and a member of its state champion math team. He studies cello with Hans Jørgen Jensen, and previously studied with Sally Gross. He also studies music with Sooka Wang, piano with Nancy Liley, and composition with Matt Hagle. Jack performs with the Chicago Youth Symphony Orchestra and has won concerto competitions for its concert and symphony orchestras. He has soloed with professional orchestras and performed at Carnegie Hall. Jack has also performed for over eight years with the cello ensemble, Cellissimo and has composed pieces for the group as well as other ensembles. As a winner of a Chicago Bulls talent search, Jack performed his own arrangement of a Queen classic at a Bulls half-time show.