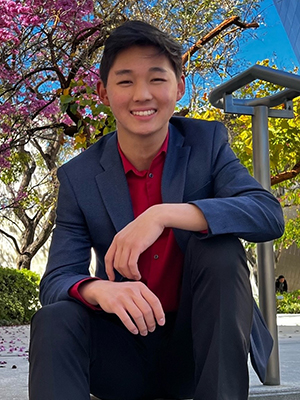 Ivan Wang (cello), 17 hails from Trabuco Canyon, California, and is a senior at Tesoro High School. He currently studies cello with Juilliard-graduate Sarah Koo. Ivan has performed in a variety of venues including Moscow International House of Music, Glinka Capella, Weills Hall, and the Renée and Henry Segerstrom Concert Hall. Recently, he received the honor of being selected as a quarter-finalist of the 2022 International Tchaikovsky Competition for Young Musicians. Ivan also served as principal cellist in Carnegie Hall’s NYO2 program in 2021 and has been a member of Chamber Music | OC’s Pre-College Program since 2018. As a founding member of the Endpin Project, a nonprofit group of cellists giving back to the community, Ivan has played for audiences such as the San Clemente Homeless Shelter and the Tijuana Border Church. He recently helped organize a fundraiser to aid families in Ukraine. Outside of music, Ivan holds a strong passion for working on and driving cars  as well as running.