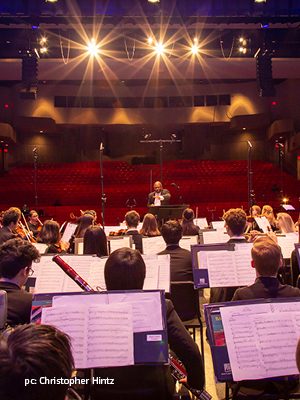 The Interlochen Arts Academy Orchestra, one of the institution’s premiere large ensembles, performs a diverse range of repertoire each year, comprising major symphonic works, concerti, and new music. The ensemble presents approximately eight major concerts each year and frequently collaborates with renowned guest artists and conductors. The orchestra often performs with students from other Arts Academy disciplines, including singers, dancers, and actors, and is the resident orchestra for the annual ballet and musical theatre productions. In addition to its performance selections, the orchestra reads and rehearses diverse and challenging repertoire in regular reading sessions. In 2016, the orchestra premiered the 2017 Pulitzer Prize in Music Finalist composer Ashley Fure’s Bound to the Bow at David Geffen Hall in New York City as part of the NyPhil Biennial.

From the Top · The Interlochen Arts Academy Orchestra