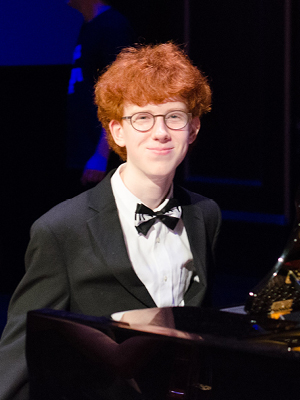 Henry From (piano), 15, from Bellingham, Washington, began his piano studies at the age of 5 at the Vancouver Academy of Music, and currently studies piano with Amanda Chan. Henry’s other teachers include Sandra Payton (violin), Edward Top (composition), Kathleen Allan (choral studies), Joseph Elworthy (chamber music) and Ruth Enns (music history). Henry received an Associate of the Royal Conservatory of Toronto diploma at age 13. A composer as well as pianist, Henry has had his chamber works played by numerous ensembles, and his choral pieces Life is but a Dream and Finale both won top prizes in the Vancouver Chamber Choir’s Young Composers’ Competition. Henry participated in the 2018 Orchestre Symphonique de Montreal Manulife Competition and won First Prize for his performance of Maurice Ravel’s Piano Concerto. Henry is an avid performer of chamber music and is grateful to Morningside Music Bridge for arranging for him to play in a trio with Anna Stube and Nahar Eliaz during the summer of 2017. The trio, called Trio Savyon, has played concerts in Calgary and Israel. This is Henry’s third summer studying piano at Morningside Music Bridge.