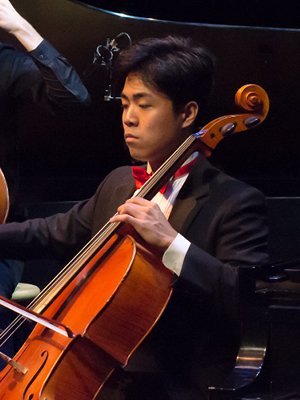 Hayoung Moon (cello), 17, is a senior at Midway High School in Waco, Texas and is a student of Dr. Gary Hardie. He is a recipient of From the Top’s Jack Kent Cooke Young Artist Award.

He was recently named as the state and division winner in the 2018-19 Music Teachers National Association (MTNA) Senior String Competition and will compete at the national finals in March 2019. In the 2017 Texas Association for Symphony Orchestras (TASO) Concerto Competition, Hayoung won the first prize in Strings, as well as the grand prize in all categories. As a winner, he performed at Morton H. Meyerson Symphony Center in Dallas. Hayoung performed as soloist with orchestras after winning the concerto competitions of the Austin Symphony Orchestra, Houston Civic Symphony, and the Waco Symphony Youth Orchestra.

Hayoung is the co-founder of the Mission Waco’s afterschool music program and enjoys volunteering as a cello teacher. He also volunteers to perform for the Blind Rehab unit at Doris Miller Veterans Affairs Medical Center. He received the Student Volunteer of the Year 2015–16 Award by Mission Waco, Mission World, Inc. Hayoung was also recently named as a candidate in the 2019 U.S. Presidential Scholars Program by the U.S. Department of Education.