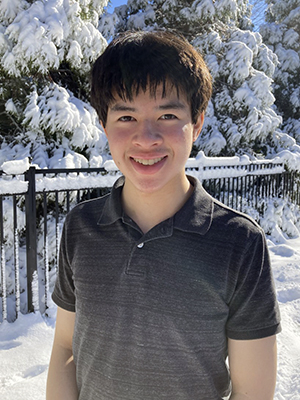 Hayden Idson (cello), 15, began his cello studies at the age of four, and he is a student of Paul Katz. His former teachers include Yehuda Hanani, Ronald Lowry, Michael Bonner, and Sandy Kiefer. Hayden appeared as a soloist for the first time at age 10, playing the first two movements of Elgar’s Cello Concerto in E minor with the Waltham Philharmonic Orchestra. In the following year, he performed Tchaikovsky’s Pezzo Capriccioso with both the Sharon Community Chamber Orchestra and the Brockton Symphony Orchestra. In 2017, he was the winner of the Wellesley Symphony Orchestra Young Soloist Competition and Waltham Philharmonic Concerto Competition and was invited to play Saint-Saëns’ Cello Concerto No. 1 with both orchestras in 2018. In 2019, he won the Concord Orchestra’s Ehlers Young Artist Competition and performed Tchaikovsky’s Rococo Variations with the orchestra. In addition to performing as a soloist, Hayden plays in a trio with Naomi Yamaguchi (piano) and Joe MacDonald (violin) and in a string quartet in the New England Conservatory’s Chamber Intensive Performance Seminar. In his free time, Hayden enjoys running and learning about music history.

Hayden’s appearance on From the Top is sponsored by Nancy and Richard Lubin.

Show 395
At the Fountain by Karl Davidov