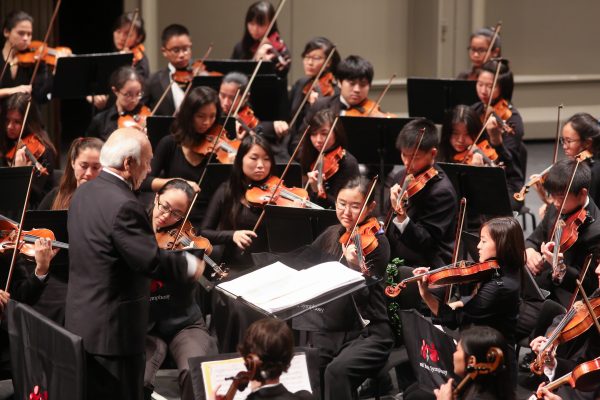 Hawaii Youth Symphony (HYS) has connected Hawaii’s young people with music education since its incorporation in 1964. HYS is the only statewide youth music education organization, with over 600 young musicians, ages 7-18, from over 100 schools statewide in its orchestras, band, and community music programs. Nearly 12,000 children each year are served through its Listen & Learn educational concerts, which are performed for youth, by youth.

Youth Symphony I (YSI) is the most advanced of HYS’s seven orchestras and is led by maestro Henry Miyamura, HYS Music Director. Recently, YSI performed with Midori as part of her Orchestra Residency Program, and in 2015, was a Finalist in the Na Hoku Hanohano awards for its live album, The Gift of Music: The Golden Ages of Waikiki with Jimmy Borges and The Waitiki 7.

Other collaborations have included a residency with Boston Symphony Orchestra principal trombonist Toby Oft, a side-by-side with the Honolulu Symphony, premieres of works by Michael-Thomas Foumai, Donald Reid Womack, and Byron Yasui, and performances with Willie K, Jake Shimabukuro, Kalapana, and the Brothers Cazimero.

For the 2016-2017 season, Youth Symphony I is composed of 98 students, grades 9-12, from 27 public, home, and independent schools across Oahu and Maui. They will rehearse more than 130 hours and perform 10 concerts on Oahu and Hawaii islands.